Menu
Please check your email for the latest updates. Information is available on the latest news section and Coronavirus COVID-19 page. Good attendance since our whole school return. 96% across the whole school. Thanks for your great efforts. Our COVID-19 page is available on the ‘Parent' tab. This includes the measures that will be in place to ensure the safety of those on our school site. Please view these measures and follow the guidance outlined. REACH FOR THE STARS... POSSIBILITIES...MAKING A DIFFERENCE...BOOKS BUILD BRAINS... ADVENTURE... Our school is 'good' in all Ofsted Framework areas. Our most recent report indicates: 'Thoughtful, high-quality care contributes well to the happy and harmonious school atmosphere.'

Hello, my name is Mr Devlin. Currently, I am teaching P.E to most year groups throughout the school. I believe P.E is an extremely important subject as it can help children to develop resilience, confidence and self-awareness. Two children from each lesson are rewarded with a sticker to show they have exemplified one of my sports core values such as respect, equality, inspiration, friendship, courage, determination and excellence.

Please keep a lookout on this webpage for the fun P.E lessons that the children will be participating in throughout this academic term.

Year 3 had the fortunate opportunity to participate in a session of circuit training with an outside organisation, which will ultimately help to improve their overall fitness levels.

Year 4 showed excellent progress during their PE lesson. They worked on developing their bowling, fielding and batting skills.

Year 6 worked really well to improve their speed, agility and ability to negotiate obstacles. These exercises will help their performance during their sports week events, which is being held next week.

Year 5 have made great great progress in their fielding and batting skills this term. They have participated in a range of games that have helped to improve their overall strategy and approach towards the game.

At the beginning of this term, year 4 were involved in activities that were aimed to help improve their overall fitness levels . This unit focused on developing the pupils' strength, agility and speed.

Currently, year 4 are developing their Kwik Cricket skills. They have been practising their fielding and batting techniques with some fun and exciting games.

Year 3 have been introduced to Quicksticks during this term. They have shown great progress in terms of their ability to control, dribble and pass the ball.

This term, year 2 have been practising their dance moves on a Monday afternoon. The topic is based around the movements of a cat. So far, they have demonstrated great agility, flexibility and rhythm.

On a Thursday afternoon, year 2 have been developing their athletic skills. This has involved throwing, negotiating obstacles and running activities.

Year 1 demonstrated great control, co-ordination and team work when dribbling a ball using tennis bats. Furthmore, they developed their abilities in passing the ball accurately to their partner.

Year 5 worked well together to compose sequences in gymnastics. They demonstrated great strength, agility and good communication skills during each of their activities.

This week, year one demonstrated  fantastic skills during their P.E lesson. They practised their hand-eye co-ordination by throwing and catching bean bags. Furthermore, they developed their ability to estimate distance and used spatial awareness to aim to place an object inside a hoop.

Year 3 have been focusing on developing their passing and tackling skills during P.E. Their tactical awareness was very impressive!

Year 6 performed a dance based on the theme 'City Life'. They enjoyed the task and worked well as a group to make sure the dance was performed in sequence.

Year 5 worked really well to perform a dance based on the sporting world.  They showed great creativity and teamwork throughout the lesson. 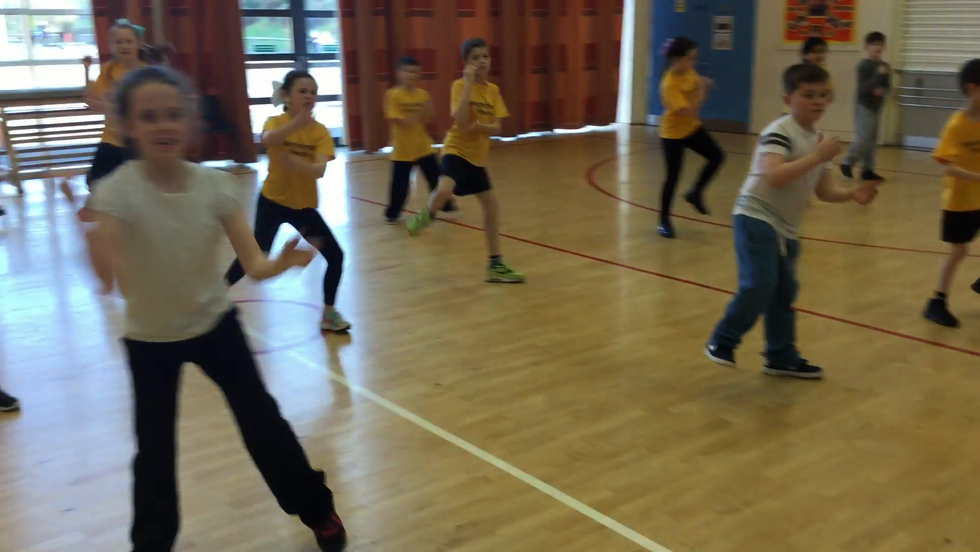 Year one have been working on their balancing, hand-eye co-ordination and passing skills.

Year 3 showed fantastic confidence when working on controlling and keeping possession of the ball during their P.E session.

Year 4 practiced some basketball skills during their P.E session this week. They worked on dribbling, passing and defending skills.

Year 6 demonstrated great creativity while making their own motif, which was related to a section of a rugby match.

Year 5 continued to demonstrate great enthusiasm and creativity towards their dance unit. This week, they worked in pairs to create graffiti by using their bodies, while synchronising their moves to the music.

This week, year 1 have been working on developing their ability to control, pass and catch a ball.

Year 4 demonstrated great accuracy when passing their hockey balls through different cones. Also, they showed great progress during the games they played.

Year 2 showed impressive skills during their football lesson. They demonstrated an improved  ability to control the ball and work with team mates.

Year 3 have been practicing their passing skills. They showed great determination and focus.

This week, year 1 have been focusing on ball handling skills, co-ordination and teamwork.

This week, reception have been using bean bags and tennis balls to develop their balance, co-ordination and concentration skills.

Year 3 have started a new unit to develop their footballing skills. This week, they have focused on improving their dribbling abilities.

Year 4 have been applying their hockey skills within a game situation.

Year 6 worked as part of a team to create their own version of the Haka.

Year 5 created a dance choreography to represent life in a busy city. 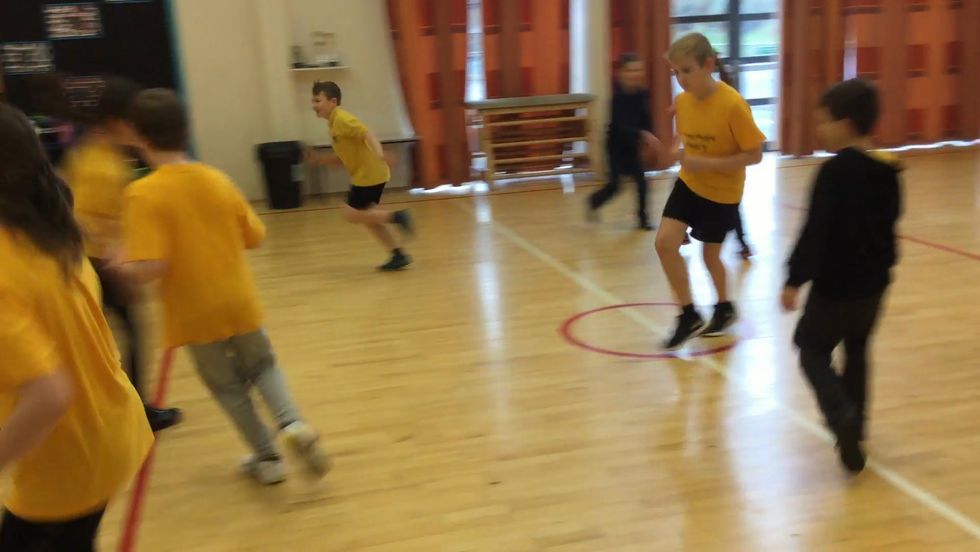 Year 2 displayed superb movement and control during their assessment session this week.

This week, reception have continued to develop their co-ordination, communication and team-work skills during P.E. All children showed a great enthusiasm and attitude towards their tasks.

Year 4 have been participating in hockey games in preparation for next week's competition. They showed some fantastic control and tactical skills, which will be put to great use when playing other teams from different schools.

Year 5 have started a new dance topic, which is based on city life. In today's lesson, they demonstrated some brilliant co-ordination and improvisation skills.

Year 6 have started their new dance unit, which is based around the theme of sports. This week, each pupil made a fantastic effort towards performing  the Haka dance. 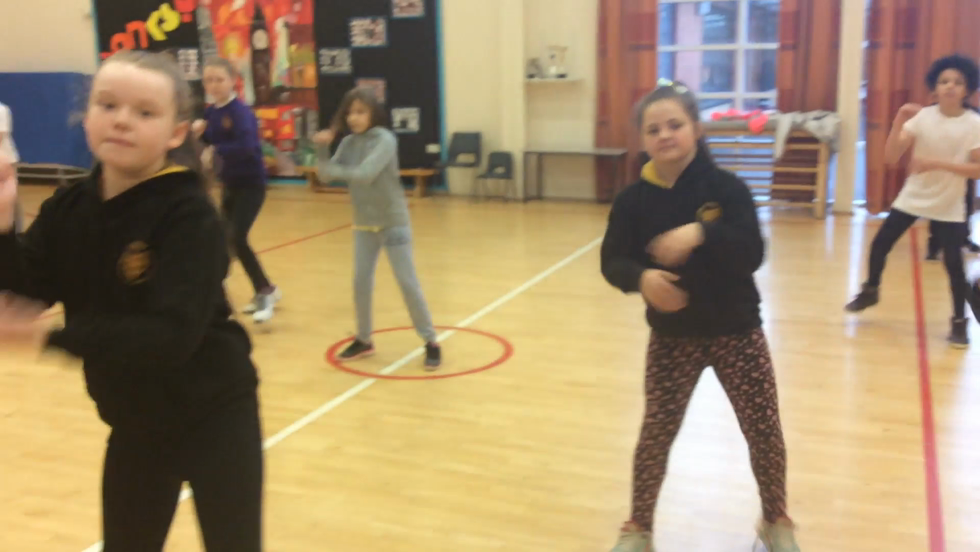 Reception had great fun this week in developing their running technique and ball handling skills.

Year 6 made progress this week in P.E by improving their ability to pass on the move and they played a game to apply their skills in a competitive situation.

Year 5 made progress this week in P.E by improving their ability to pass on the move and they played a game to apply their skills in a competitive situation.

Year 2 continued to develop their hand-eye co-ordination, agility and communication skills by using a bat and ball.

Year 2 showed great enthusiasm towards developing their passing and dribbling skills when using a tennis bat. There may well be a future Andy Murray among this bunch!

Year 4 continued to develop their hockey skills with Mrs Marshall. At the end of the lesson, they played a fantastic game which involved tackling and shooting.

Year 6 demonstrated great passing and tackling skills during their basketball lesson this week.

Year 5 have been practising their basketball skills in preparation for a tournament, which will be held in the New Year.

This week, all classes got an opportunity to practise their rugby skills with a qualified rugby coach. All children really enjoyed the lessons, as they helped to promote teamwork, develop communication skills and understand match strategies.

Reception were very fortunate this week to have a Rugby Falcon player teach them some basic ball handling skills. There may will be some future Rugby players among this bunch. Watch this space!

Year 3 practiced using a chest, overhead and bounce pass this week. They then had a game to develop their tactical awareness skills which they really enjoyed.

This week, year 2 have been developing their skills in dribbling, controlling and passing with a football. They showed a great sporting attitude towards their tasks.

Year 2 have been developing their key skills in passing, controlling and communicating when working with a ball. They demonstrated a high level of enthusiasm and achieved great progress throughout the lesson.

Year 4 have continued to improve their hockey skills this week by dribbling around cones, passing on the move and working as part of a team.

Year 5 have showed great progress during their hockey lesson. I am sure they will perform well in our upcoming tournament in the New Year.

Year 3 used an exciting warm up to progress their mobility skills and spatial awareness. They then worked on improving their ability to control and pass a ball accurately.

On Wednesday, year 4 practiced their hockey skills with Mrs Marshall. They learned how to control the ball, dribble and use a reverse pass.

Year 5 were introduced to hockey this week, as part of their Invasion Games module. They developed their skills in dribbling with the ball, tackling and using the push pass.

This week, children from reception completed a range of games involving a parachute such as Poisoned Snakes, Popcorn and Parachute Tag. These activities helped the children to improve their balance, communication skills and hand-eye co-ordination.

The children also practiced their phonic skills by considering the different sounds within each of the activity names.

Year 2 demonstrating their knowledge about the importance of warming up and stretching before physical activity.

Year 2 had a fantastic time learning to create a sequence of movements by jumping over a beanbag. There may well be an Olympic synchronised swimming pair amongst this bunch!

Reception have had great fun this week when using a parachute to develop key skills such as teamwork, communication and spatial awareness.

Unfortunately not the ones with chocolate chips.

Some cookies are necessary in order to make this website function correctly. These are set by default and whilst you can block or delete them by changing your browser settings, some functionality such as being able to log in to the website will not work if you do this. The necessary cookies set on this website are as follows:

Cookies that are not necessary to make the website work, but which enable additional functionality, can also be set. By default these cookies are disabled, but you can choose to enable them below: